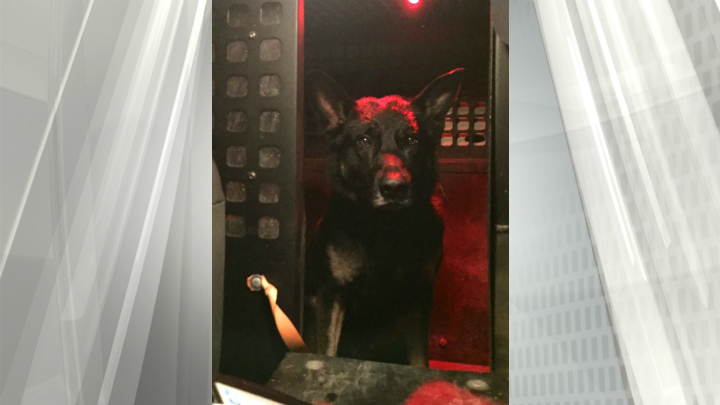 A Saanich police dog named “Hitch” came through for officers Wednesday night helping to track down a suspect that fled a dumped car at Carnarvon Park after allegedly driving dangerously. Oak Bay police Dep. Chief Ray Bernoties says a 41-year-old man was arrested and later released on a promise to appear in court. Police are recommending charges of dangerous driving and mischief.

Bernoties says an ambulance in Saanich called police Wednesday night after seeing a car allegedly speeding, and the driver then went into Oak Bay. Authorities say after the driver went through various neighbourhoods, he then left the vehicle at Carnarvon Park. Bernoties says the park was damaged by tire marks on the lawn of the property.

Tire marks from Wednesday night on the property of Carnarvon Park in Oak Bay.

Bernoties says the suspect got home on foot, but with the help of Hitch, officers were taken to a basement window where the man was found and arrested.

PSD Hitch enjoyed assisting @OakBayPolice by tracking a bad guy from a dumped vehicle to the basement window he’d hoped to escape through. #GoodBoy #YYJ pic.twitter.com/rbwuNvgwWe

The suspect’s vehicle was towed from the park and is being looked at by the Saanich forensics identification team. Oak Bay park officials are also out Thursday assessing the damage to Carnarvon Park.