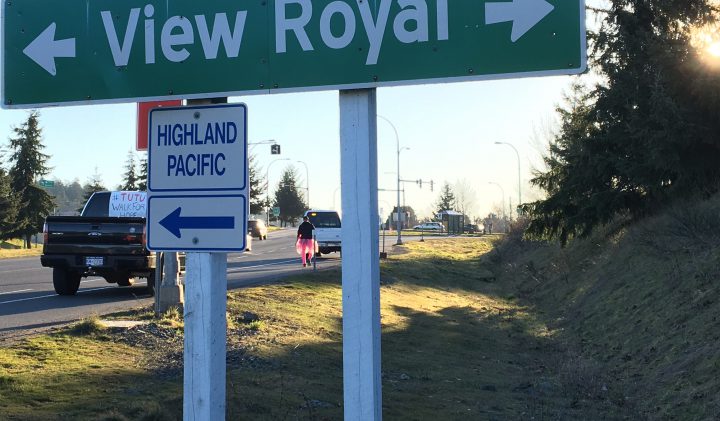 Ryan Thirlwall walked overnight, over the Malahat, to reach the Victoria Boys and Girls Club Wednesday. He departed Nanaimo Tuesday.

Ryan Thirlwall arrives in View Royal Wednesday morning. He began his walk, dressed in a pink tutu, in Nanaimo Tuesday, and is arriving in Victoria Wednesday. The walk is raising funds for the Boys and Girls Club of Greater Victoria and youth mental health programs.

This is the third time Thirlwall has made the trek, also walking from Nanaimo to Victoria in 2012 and 2016. Thirlwall said he spent much of his youth on the streets and struggled with addictions. He says he was introduced to the Boys and Girls Club and entered its “Turnabout Program”, which he credits for launching a new path in his life. Thirlwall graduated high school and began fundraising initiatives, earning him Canada’s Top 20 Under 20 “Youth in Motion” in 2007. This is the first of two walks Thirlwall is taking in the pink tutu this month, as he will trek from Sidney to Mile Zero and the Terry Fox statue in Victoria, then to Langford City Hall next Wednesday.