Former Treasury Board president tells Maclean’s much more needs to be told in the SNC-Lavalin affair, man found guilty of 2017 assault and robbery in Nanaimo released and federal government lawyer accuses B.C. of “Trojan Horse” legislation to obstruct Trans Mountain pipeline expansion. Those stories and more on Morning CHEK. 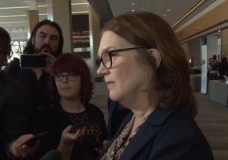