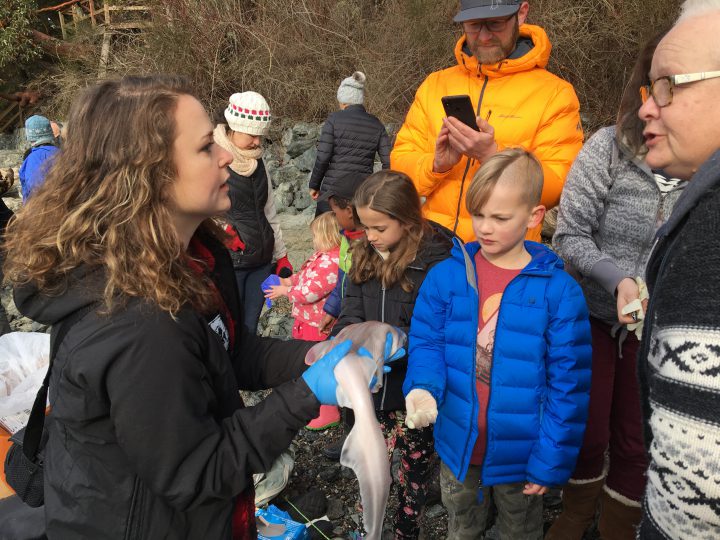 Kids and adults take a look at a baby shark that was removed from a dead pregnant bluntnose sixgill at Coles Bay on Feb. 7, 2019.

Kids and adults visiting Coles Bay Thursday had the chance to see baby sharks as researchers performed a necropsy on a dead pregnant shark. The 3-metre (10 foot) long bluntnose sixgill shark washed up at Coles Bay in North Saanich on Tuesday morning and the necropsy started on Thursday. Seventy-two dead pups have been removed from the dead pregnant shark. The University of Victoria’s Juanes Laboratory was approved by Fisheries and Oceans Canada (DFO) to perform the necropsy alongside shark experts in the region. Both DFO and the Juanes Laboratory think the shark came into shallow water to give birth and potentially had complications, as there are no signs of trauma. Bluntnose sixgill sharks, also known as cow sharks, give birth to live pups in shallow waters and can carry up to 100 over their two- year gestation period. A few years back, another pregnant shark washed up in Port Alberni. Cow sharks are deep-water predators, identified by the six pairs of long gill slits on each side of their head, yellow lower teeth and a long tail. Its dorsal fin is also positioned closer to the tail, rather than the centre of its back. They have been found in ranges of oceans around the world, typically on ocean floors and often in tropical and temperate waters. They are one of 12 species of sharks in Vancouver Island coastal waters. The results of the necropsy should be available later this week or early next week.

One of the baby sharks removed from a dead pregnant bluntnose sixgill at Coles Bay on Feb. 7, 2019.

Mesaurements taken during the necropsy of the dead pregnant shark at Coles Bay on Feb. 7, 2019.

Researchers perform a necropsy of the dead pregnant shark at Coles Bay on Feb. 7, 2019.