July 9th, 2018
Island Health is issuing a new order to the City of Nanaimo to address a number of health hazards at that communities tent city. The health authority wants the city to provide drinking water, extra portables and hand sanitizing stations.
But the Nanaimo’s mayor says he and council don’t want to comply with the orders. Kendall Hanson reports. The number of people living at Nanaimo’s “DisconTent City” is continuing to grow. Late last week Island Health determined the conditions there were a health hazard and ordered the city to take action by providing drinkable running water, additional portable toilets and hand sanitizing stations. But the city said no saying the camp is illegal and that the region’s medical health officer should have shut it down. “That’s one way to deal with the perceived or potential health risk down there. Another way that the medical health officer has is to order the vacating of that property. He can do that one as well,” said Bill McKay, Nanaimo’s mayor. Nanaimo’s mayor says the city wants to stop any increased costs associated with servicing the camp. “We have lots of questions for him. the order was very vague so we still want to have more details and we couldn’t possibly comply in the timeline he gave us,” said McKay. But the people at the camp say the city should make the site more livable. “That is totally necessary,” said Linda Choy, a supporter of those at Nanaimo’s tent city. ” I come here as a guest to visit some people and try to help them out, donate some food a few meals because a lot of these people are malnourished and they’re hungry and they need food and sustenance and there’s lack of water.” Today the medical health officer issued a new order. In a statement, Island Health says it “provides for ongoing discussion between the City and Island Health on ensuring free-flowing potable water, toilets, adequate sanitation and garbage removal” The city now has until 5 pm Thursday to comply with the new order. “I’m really happy that VIHA is stepping in to help out,” said Choy. “As for the washrooms, I had to wait myself for 10 minutes and it’s very hard to have only 2 washrooms for close to 300 people. That’s insane.” Those at Discontent hope the city will comply. It’s a showdown that Nanaimo’s mayor says will have repercussions for the city regardless of whether it complies with the orders or not. 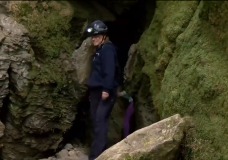