MONTREAL — A former SNC-Lavalin executive and his lawyer had obstruction of justice charges against them stayed Friday on the grounds it took too long to bring the case to trial. Sami Bebawi, a former SNC-Lavalin executive vice-president, and his Montreal-based tax lawyer, Constantine Kyres, had been accused of offering a $10-million bribe to have a key witness change his testimony in a fraud and corruption case against Bebawi. The alleged recipient of the offer was Riadh Ben Aissa, another former SNC-Lavalin executive, who was detained in Switzerland at the time on charges of corrupting officials in Libya on behalf of the Canadian engineering firm. After Bebawi found out he was being investigated, he allegedly asked Kyres to travel to Switzerland and offer to pay off Ben Aissa, Superior Court Justice Guy Cournoyer Court wrote in a summary of the obstruction case. In exchange, Bebawi wanted Ben Aissa to offer authorities a version of events that would exonerate him. Bebawi and Kyres were charged with obstruction of justice in 2014.  A stay of proceedings was issued in February 2018 after evidence was ruled inadmissible, but the charges were reinstated by direct indictment last May. The trial had not begun, and it would have been more than 60 months after charges were laid before it concluded. The defendants invoked the Supreme Court of Canada’s 2016 Jordan decision, which set limits on how long a criminal cases can take, and Cournoyer agreed. The judge said Crown prosecutors did not show that the delays in the case were reasonable. Cournoyer wrote that even after the Jordan ruling, the case against Bebawi and Kyres “remained forgotten” for more than 11 months. “The prosecutors … were unable to explain what happened in the year that followed the Jordan decision,” Cournoyer wrote. “The file seemed to have been abandoned like a ship without a captain that is drifting slowly, but inexorably, towards a reef.” Bebawi is still facing charges including fraud and bribery of a public official in relation to SNC-Lavalin’s dealings with the regime of the late Libyan dictator, Moammar Gadhafi. The trial is upcoming. Ben Aissa has given statements to authorities implicating Bebawi in the Libyan bribery scheme, Cournoyer wrote. When asked as he left the courthouse how he felt about having one case completed with one to go, Bebawi crossed his arms over his chest and said: “It’s crazy, it’s crazy, it’s crazy.” The remaining case against Bebawi stems from the same Project Assistance investigation that led to charges against SNC-Lavalin in 2015. Those charges continue to fuel controversy in Ottawa following a report that the Prime Minister’s Office pressured former attorney general Jody Wilson-Raybould to help the company avoid criminal prosecution. SNC-Lavalin and two of its subsidiaries were charged with paying nearly $48 million to public officials in Libya between 2001 and 2011 to influence government decisions. The company is also accused of fraud and corruption for allegedly defrauding various Libyan organizations of roughly $130 million. After Cournoyer’s ruling, Kyres’s lawyer, Frank Pappas, said justice was served. “We won this case about a year ago when a judge decided, a judicial ruling, that the RCMP operation was done illegally,” he told reporters. “Finally, the delays caused by the Crown’s decision and strategies is what sunk their ship.” Crown prosecutor Benoit Robert said he will analyze the decision before deciding whether to appeal. Giuseppe Valiante, The Canadian Press 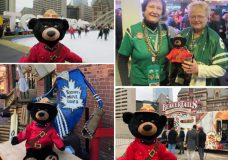