Freeland leaves D.C. with no tariff deal, despite early optimism from U.S.

OTTAWA — Close, maybe, but no cigar. Foreign Affairs Minister Chrystia Freeland came and went from Washington on Wednesday, shifting diplomatic gears and jetting to Havana on a day that saw early hope that the end of the Canada-U.S. tariff dispute was close fizzle in a puff of figurative smoke. “I think we are close to an understanding with Mexico and Canada,” Treasury Secretary Steven Mnuchin had said in Congress, prior to Freeland’s meeting with Trump trade czar Robert Lighthizer. Mnuchin was testifying before the U.S. Senate appropriations subcommittee, where he was asked why those two countries continue to face a 25-per-cent duty on steel and 10-per-cent levy on aluminum exports to the United States. Freeland had no new developments to report as she emerged in the morning from the headquarters of the United States Trade Representative. She said she had a “good meeting” with Lighthizer. “And we made the case, as we have been doing for some time, that the best outcome for both Canadians and Americans would be to lift those tariffs and to have free trade between our two countries,” Freeland said.  Freeland met later with the influential Republican chair of the Senate finance committee, Chuck Grassley, who had said earlier this week that the tariffs might soon be lifted. After that, she expressed optimism over incremental progress, though she refused to speculate publicly on whether a resolution of Canada’s trade dispute with the U.S. is close at hand. “One meeting closer to achieving a great outcome,” Freeland said. And then: “OK, I think we need to leave for Cuba soon.” Freeland will be pressing Cuba’s foreign minister over his country’s steadfast support for Venezuelan President Nicolas Maduro. Canada and its Western Hemisphere allies in the Lima Group, as well as the U.S., view Maduro as a dictator who has impoverished his people and should relinquish power.  “My sense is that we’re making progress but there’s obviously more work to be done,” Finance Minister Bill Morneau said of the tariff situation in Ottawa Wednesday. Morneau said he brings up the tariffs with Mnuchin every time they talk, including in a telephone call last week and face-to-face meetings last month in Washington at World Bank and G20 finance ministers’ meetings. “I’m regularly putting forward the point of view that these tariffs are not only not helpful to the Canadian economy — to either the producers or buyers of steel — but they’re also damaging to the U.S. economy,” said Morneau.  President Donald Trump imposed the tariffs during contentious continental trade talks by using a section of U.S. law that allows the president to tax imports on national-security grounds. The three countries’ negotiators ultimately reached a new deal that the Americans call the United States-Mexico-Canada Agreement. Mnuchin acknowledged to the senators what business leaders in all three countries, as well as U.S. lawmakers on both sides of the political divide, have been saying: that the tariffs must be lifted for the newly negotiated North American free trade deal to be ratified by legislators. “I can assure you that Canada and Mexico are the priority,” Mnuchin said. “The president has instructed us to try to figure out a solution, and this is a very important part of passing USMCA, which is a very important economic agreement for two of our largest trading partners.” Freeland’s visit comes after what she described as “a couple of good conversations” between Trump and Prime Minister Justin Trudeau in telephone calls on consecutive days late last week. She, Trudeau and others in the Canadian government have derided the tariffs as absurd, illegal and insulting. Lighthizer planned to meet House of Representatives Speaker Nancy Pelosi on Wednesday to discuss the Canada-Mexico tariffs and the broader U.S. tariff war with China. Pelosi and fellow Democrats in the House have raised concerns about ratifying the new trade deal because of concerns over labour rights in Mexico, among other things. Freeland discussed workers’ rights in her meeting with Lighthizer, and filled him in on her talks on Tuesday in Toronto with two visiting members of the new Mexican government, which is embarking on major labour reforms to meet its obligations under the new trade deal. “We discussed ways Canada can support Mexico in this important effort, which is good for workers in Mexico, good for workers across North America,” she said. “Canada is a real supporter of union rights and we’re happy to be discussing that important issue with our Mexican colleagues.” Mike Blanchfield, The Canadian Press 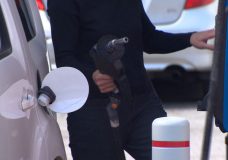 Inflation in Victoria unchanged in April, highest among Canadian cities