OTTAWA — Britain’s prolonged divorce proceeding from the European Union will give it more time to forge a proper free-trade deal with Canada, says the country’s envoy to Ottawa. The United Kingdom is not legally allowed to engage in free-trade negotiations until it has departed the EU, but High Commissioner Susan le Jeune d’Allegeershecque said her country’s top trade negotiator has been meeting regularly with Canadian representatives to sketch out the broad strokes of a bilateral deal. Britain remains part of the Comprehensive Economic and Trade Agreement between the EU and Canada as long as it is a member of the 28-country bloc. Canadian and British negotiators aim to replicate CETA as much as possible in a two-country pact, le Jeune d’Allegeershecque told The Canadian Press from London on Thursday. She spoke hours after a frustrated EU, in an emergency meeting with British Prime Minister Theresa May, granted Britain a Brexit reprieve until the end of October. The Halloween extension avoids a messy no-deal departure from the EU that was to occur Friday, which could have triggered a British recession with immediate tariffs on trade with the continent. “The plan is still to have a transitioned form of the CETA agreement, which would reflect all the benefits that that (deal) has,” le Jeune d’Allegeershecque said. “We obviously now have a little bit more time.” That includes technical discussions about particular chapters and topics, she added. “The legal position is we’re not allowed to negotiate,” said le Jeune d’Allegeershecque. “Technical talks about what an agreement might look like are possible and those have been going on. There’s been intense co-operation and contacts between our two trade-policy and trade-negotiating teams.” That work follows May’s September 2017 visit to Ottawa during which she and Prime Minister Justin Trudeau pledged a “seamless” transition out of CETA and into a new trading relationship after Brexit. The May government’s attempts to follow through on its pledge to break from the EU have been fraught with frustration, delays and no end of drama. The extension was reached in Thursday’s early morning hours in Brussels, between May and EU leaders. She was back in London later Thursday and told Parliament she wanted to strike a compromise to exit as soon as possible. That won’t be easy because the House of Commons has rejected her Brexit plan three times. In multiple votes meant to gauge what the British Parliament might support, majorities have rejected every scenario they’ve been offered, from simply scrapping the plan to leave the EU to holding a new national vote on the idea to leaving in a “hard Brexit” with no agreed terms. May said if her own divided Conservatives and the opposition Labour Party can’t find a way forward soon, Britain will have to take part in the European Parliament election late next month. May told reporters before leaving Brussels that she was hopeful the departure could take place before June 30 and if possible, before the European election. “It’s quite an ambitious objective on her part because she will have seen how difficult it has been to get anything through Parliament recently,” said le Jeune d’Allegeershecque. Canadian Foreign Affairs Minister Chrystia Freeland said her department has been “very assiduous in working out a transition on all of our treaties, including CETA” for a post-Brexit Britain. “However, I think it would be fair to say we are negotiating with a target which is both moving and quite understandably focused on serious challenges at home,” Freeland told the Senate foreign-affairs committee this week. Canada views the situation as it’s watching two married people it cares about “going through some difficulties,” Freeland said. “They seem not quite yet to have decided where they’re going to end up as they work through those difficulties, but what we say to both the EU and to Britain — and this is very warmly received — is we are going to remain the best of friends with both of them, no matter what the outcome.” The prolonged British departure is weighing heavily on Britain’s European allies. Kareen Rispal, the French ambassador to Canada, said that as a long-time EU booster she hopes that Britain’s inability to say goodbye might actually lead to its staying in the bloc. “Brexit is not a win-win for anyone,” she said in an interview. “It’s not one for the U.K. It’s not one for Europe. It’s not one for France. France will suffer because we do lots of trade with the U.K.” France will find a way to carry on with Britain, regardless of the outcome, she said, but added: “At one point we need to end this uncertainty because it’s not good for the economy, for companies.” U.S. President Donald Trump used Twitter Thursday to complain that it was “too bad that the European Union is being so tough.” He said the EU is “likewise a brutal trading partner with the United States,” something he said he would change. Le Jeune d’Allegeershecque had no comment on Trump’s tweet, but said the EU has not been tough on her country. “I think they have legitimate concerns about such things as the European parliamentary elections. I think what came out was a very decent compromise, which gives us both what we wanted,” she said. “The fact that we and the EU are content to what’s been agreed is the most important thing.” Mike Blanchfield, The Canadian Press 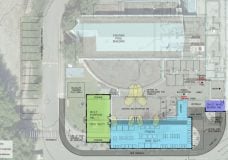